General Motors has produced some significant performance vehicles, from the muscle cars such as the GTOs and SS396 Chevelles of sixties and early seventies and, of course, the Corvette for over 60 years. Currently, the Corvette remains top dog in the GM performance world, but is now joined by, of all marks, Cadillac. The currently produced ATS-V and CTSV sedans have taken their rightful place amongst the most capable performance sedans produced anywhere in the world.
Circuit Of The Americas (COTA) is easily the finest road racing facility in North America, bar none. This facility, constructed at great expense to once again host Formula One races in the United States and located just outside Austin, Texas, boasts 3.4 miles of pristine race course with 20 turns and elevation changes, especially turn 1, not duplicated anywhere in the world. I was fortunate enough to drive this course five years ago with the Porsche Club of America and can also attest that the support facilities, meeting rooms, paddock, and pit area are also first rate–the best I’ve ever experienced.

So, when an invitation to experience the Cadillac V Series and COTA at the same time appeared out of nowhere in my email, I just could not turn it down. The Cadillac V-Performance Lab, as it was called, promised a full day of experiencing both V Series Cadillacs on the full road course, a skid pad, and an autocross course. Sounded great!

As things turned out, it was better than great. I flew to Austin on Wednesday, August 22nd and upon arrival at COTA, early Thursday morning, I realized I was in for something special. As I topped the hill in my rental Impala overlooking the expansive paddock area I was confronted with the site of over 100 V Series Cadillacs parked in rows. I later found out that Cadillac had transported 125 V Series Cadillacs to this event. I had anticipated maybe a group of 10 -15 students. It turned out there we 60+ of us who signed up for this event on Thursday, which would be repeated again on Friday and Saturday for others.

The morning began with a breakfast buffet featuring great food, no plastic forks or spoons, and no paper plates. It was held in an expansive meeting room on glass tables and chairs. This level of service was repeated when lunch was served later in the day. A welcoming and safety briefing was presented and we were given an overview of what to expect during the day. In addition, 25, yes that’s 25, driving instructors were presented to the group. Introduced separately were two guest instructors, Christian Fittipaldi, driver of the #5 Cadillac prototype in the IMSA series, and Johnny O’Connell, former Corvette and Caddie team driver, More on them later.

After the breakfast session, it was off to the cars right away. A pleasant surprise in that there was no hour-long classroom period, which is often the norm at most driving schools. We were broken up into four groups of 15-16 drivers and taken to various locations around the course.

They broke the course into three sections as our group rotated from section to section. An instructor would lead a group of three students on three runs through each section. While this was a follow the leader exercise it became apparent that this was not going to be a track touring affair. On each run the speed increased and by the third run we were hitting speeds similar to those I experienced in my Cayman S five years ago. During these sessions we were able to drive both ATS-Vs and CTS-Vs.

While half of our group was out driving on the course they kept the rest of us busy with briefings held trackside by one of the driving instructors. They always introduced themselves and gave their backgrounds, which were extensive in almost every case. Cadillac must have spent a ton to hire all these people for three days. The briefings on various corners, trail breaking, and the old standby, always look ahead, were quite professional and informative.

Once these track sessions were completed we moved to an autocross course setup on a large paved area within the confines of the track The course was about 30 seconds long and during this practice session we drove it using CTS-Vs. More on autocross later.
During most of the day our group was lucky enough to be joined by Christian Fittipaldi. He is the driver of the # 5 Mustang Sampling Cadillac Daytona Prototype International (DPI) in the IMSA WeatherTech SportsCar Championship Series. He is also the son of former Formula One Champion Emerson Fitti- paldi. He proved to be a very personable and approach- able young man. While I was able to have several conversations with him, we never got to the point where I could call him Chris and I’m sure he will not remember me. That said, it was a great, and unexpected, pleasure to be able to spend the day with him.

After lunch our group moved on to the skid pad exercise, which I admit was probably my least favorite event of the day. When I mentioned to the instructor that I was from Minnesota and have experienced several skid pad like opportunities, both planned and unplanned, we were able to shorten my opportunity to slide around in circles.

Then it was on to driving the full track. In preparation we were suited up in a helmet and, to my surprise, a HANS Device. It was my first, and probably my last, opportunity to wear a HANS Device and initially I found it rather uncomfortable. Once out on the track it became a total non factor.

We were able to perform four full laps in the ATS-V and then another four laps in the CTS-V. The format used was similar to the morning sessions with an instructor in a lead car followed by three students, each in their own car. This format was somewhat limiting in that on some laps we were constrained by the slowest student in the group. However, when I was able to rotate to the front of the line I was able to push the instructor and he responded with very fast laps. At one point, on the long straight between turns 11 and 12, we were able to hit 140+ mph on a couple of occasions.

I had never driven a car with 600+ horsepower and Brembo brakes, both of which the CTS-V features. For me, experiencing both was a revelation. Accelerating out of a corner with that much power is just a hoot and once I became familiar with the brakes, how deep you could go into a corner was mind-blowing. I’ll never be able to prove it, but I’m convince that I could equal or even surpass the lap times I experienced in my Cayman S on Hoosiers in this big sedan, which is truly amazing. The ATS-V was equally impressive. Not as powerful, but I believe it handled a little better than it’s big brother.

If it was Cadillac’s intention to impress us with this generation of V Series machines, they succeeded, with me at least, and from my conversations with others, I believe they accomplished that with most of the participants.

The fact that I will never be able to afford one (an example of a well equipped ATS-V displayed an 80K price tag) does not detract from my enjoyment of this event.
The final event of the day for our group was the autocross competition. We returned back to the autocross course we had driven in the morning and were allowed three laps, this time in an ATS-V. The third lap would count as our official time for the competition. I had assumed I would be faster in the more agile ATS on this relatively tight course. I was surprised when my best time was seven tenths slower than my time in the CTS that morning.

I can’t help but finish this article than by doing what I’m sure will come across as a bit of bragging. It probably is, but it is also a tribute to the experiences I have been afforded over the years by COM, Suburban Corvettes, and various PCA clubs around the country.

I won the autocross competition for my group of 15. If you were to assume I was competing against a bunch of old fart fat-cat Cadillac owners you would be very wrong. The majority of the folks in attendance were younger than myself. Indeed, when a group of five of us recognized each other at the airport the next day waiting for our flight back to Minnesota, the oldest person other they me appeared to be about in his mid 40’s.

Things did not end there. When the autocross event was over I was tapped on the shoulder by one of the instructors who said, “Come with me.” He subsequently informed me that the instructors had been observing us throughout the day and selected the most impressive driver on track in each group to be rewarded with a fast lap ride with one of the instructors, including Fittipaldi and O’Connell What a great treat and what an eye-opener. Its amazing what someone with their experience and confidence in that car can do on the track. I felt good about the fact that they were driving pretty much the line I preferred, however, they were just doing it at a much, much faster pace.

The frosting on the cake was a swag bag given to all of us which contained a full face Snell 15 certified helmet that must be worth at least $200 and a very nice jacket you’ll see me wearing this fall. All in all, a fabulous way to spend a Thursday in August in Texas, even if the temperature was 101F most of the afternoon.

Click on photo below to see a slide show of Wally at COTA! 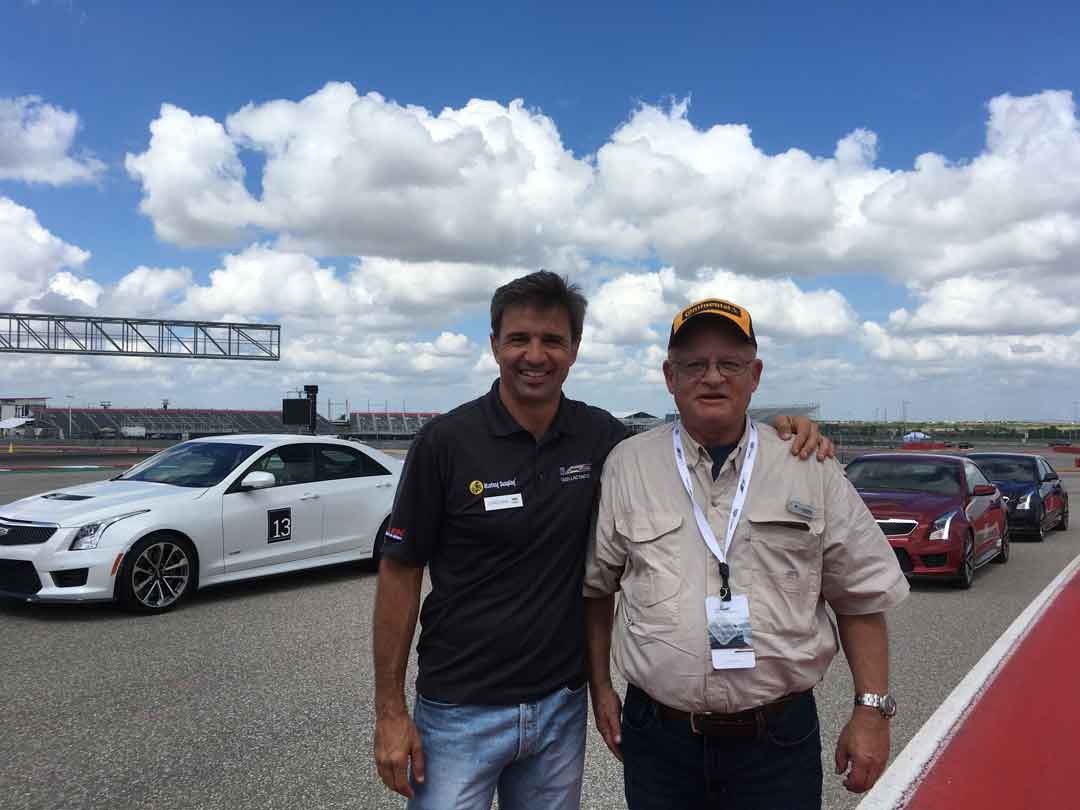 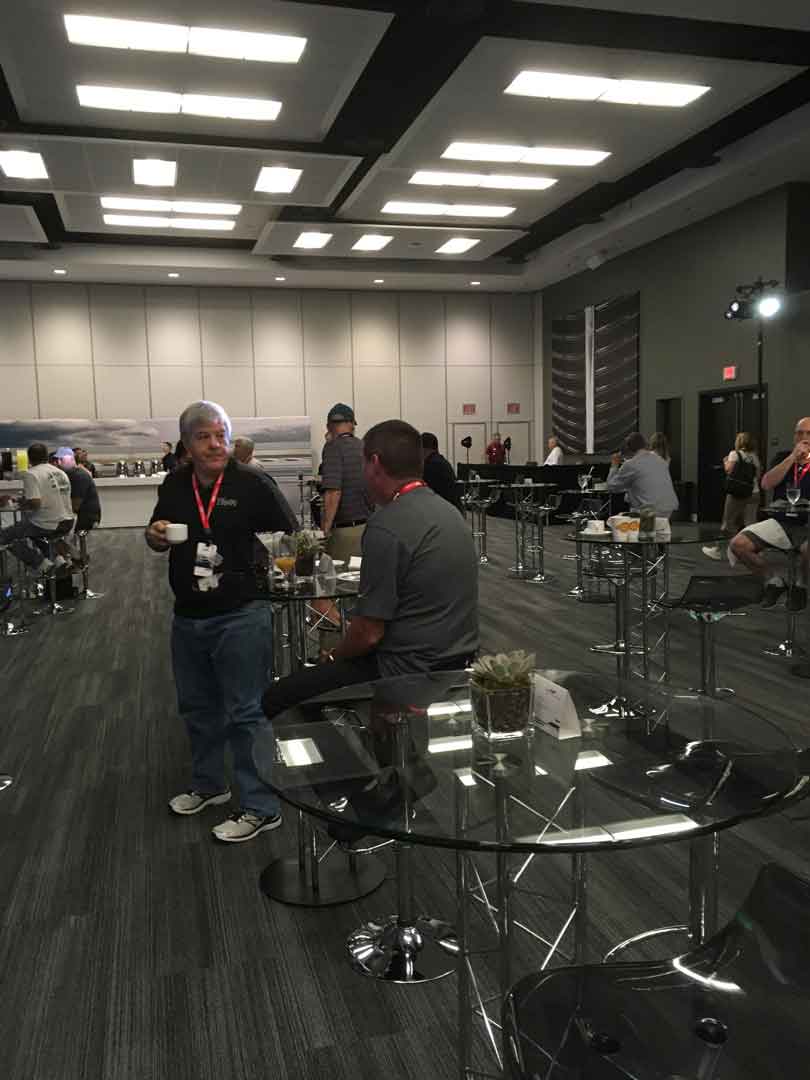 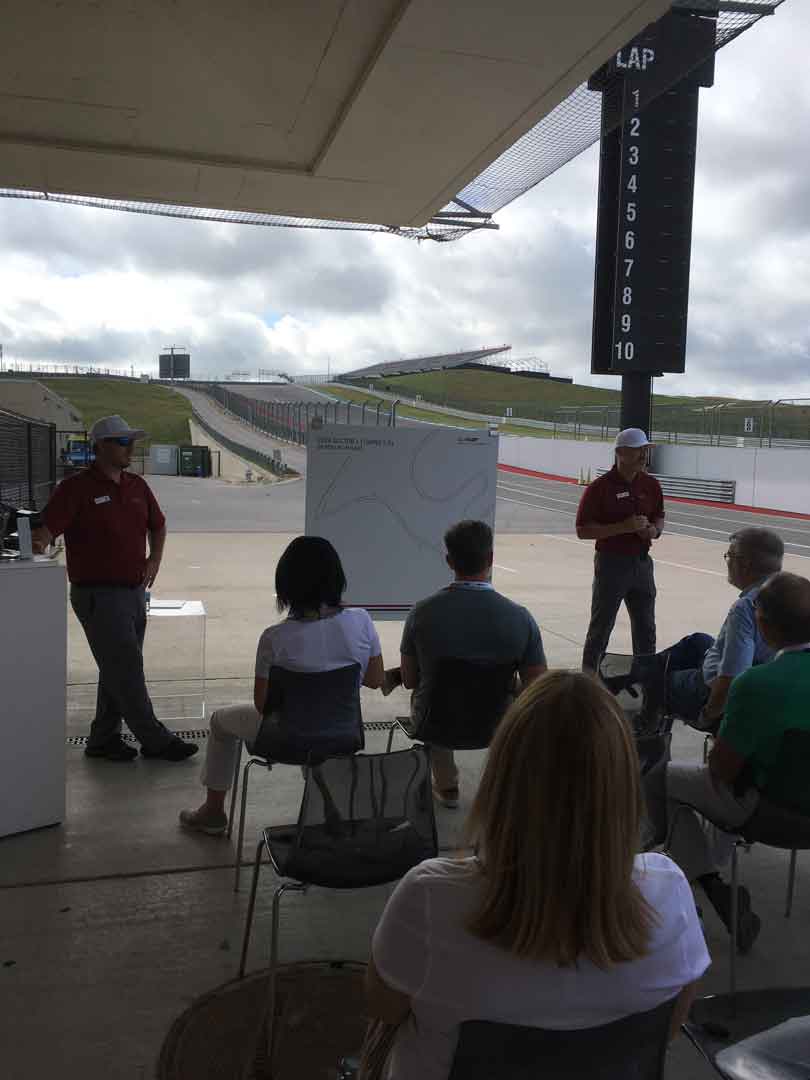 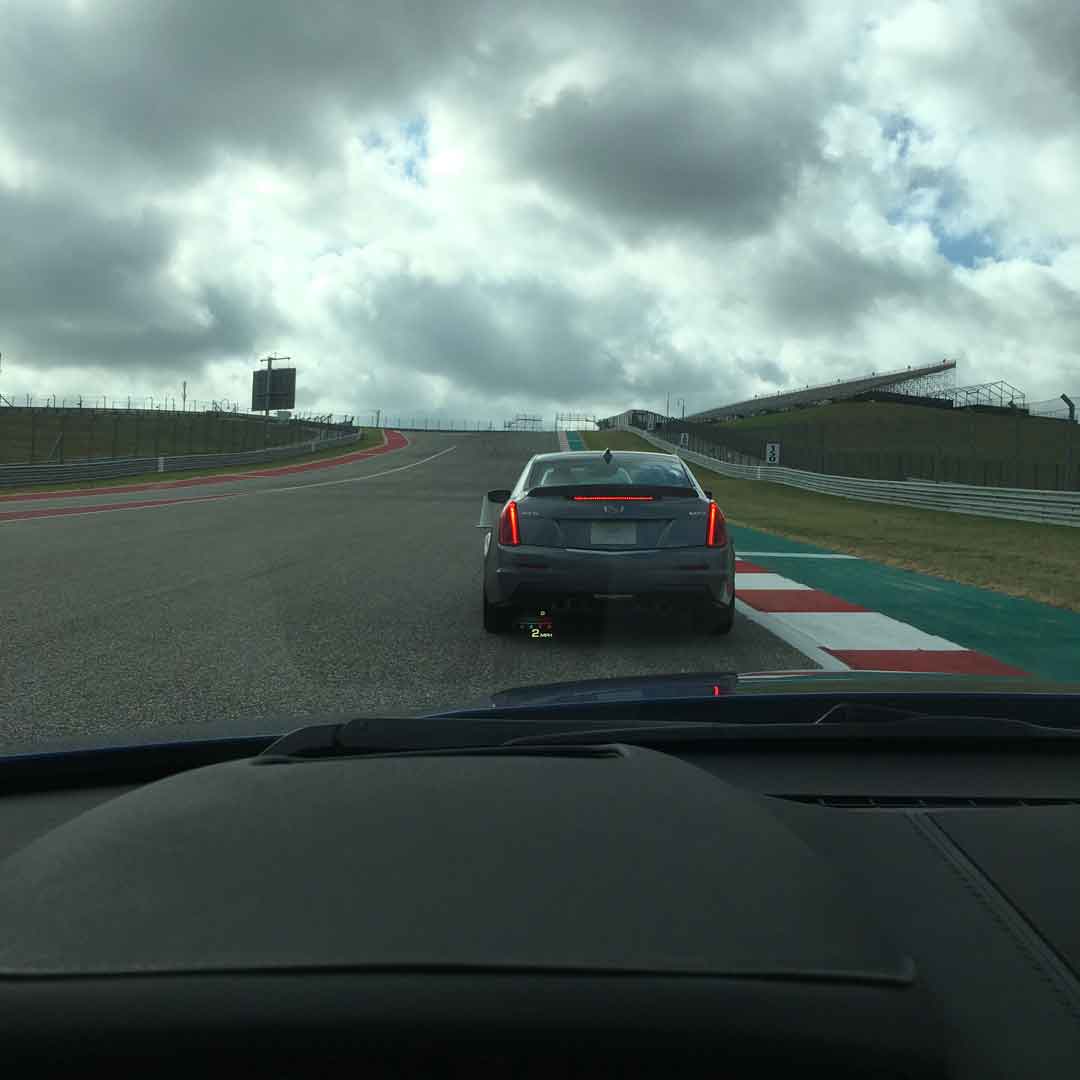 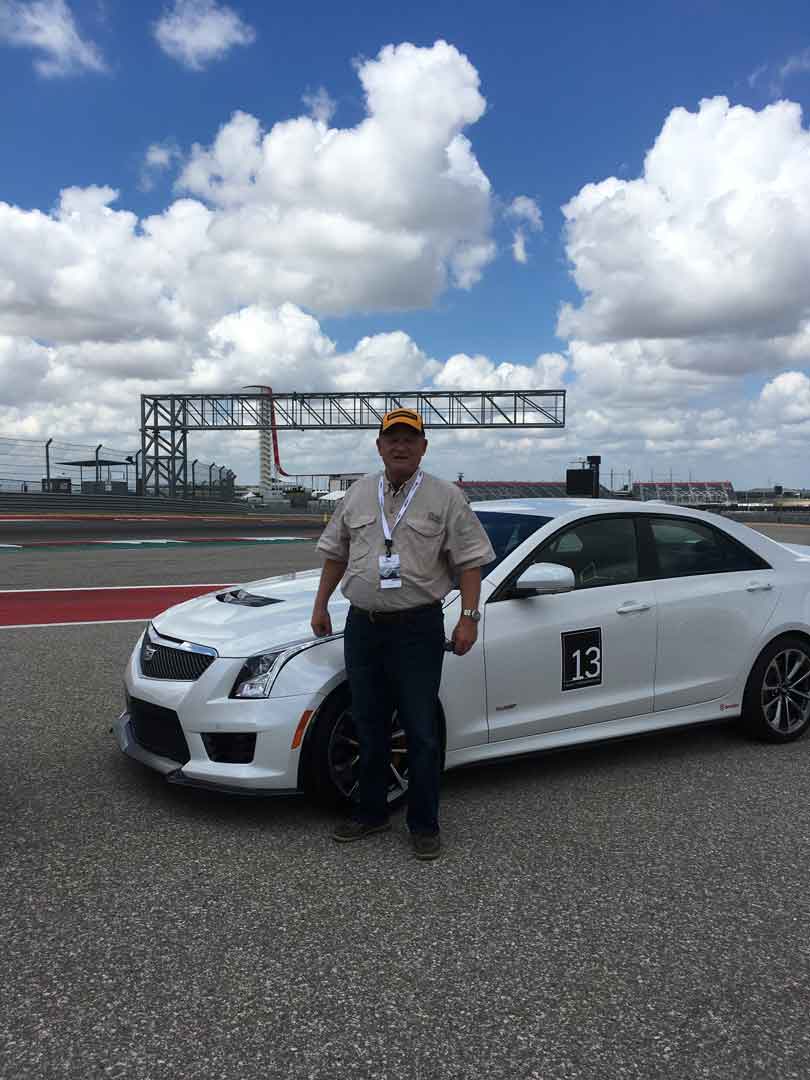 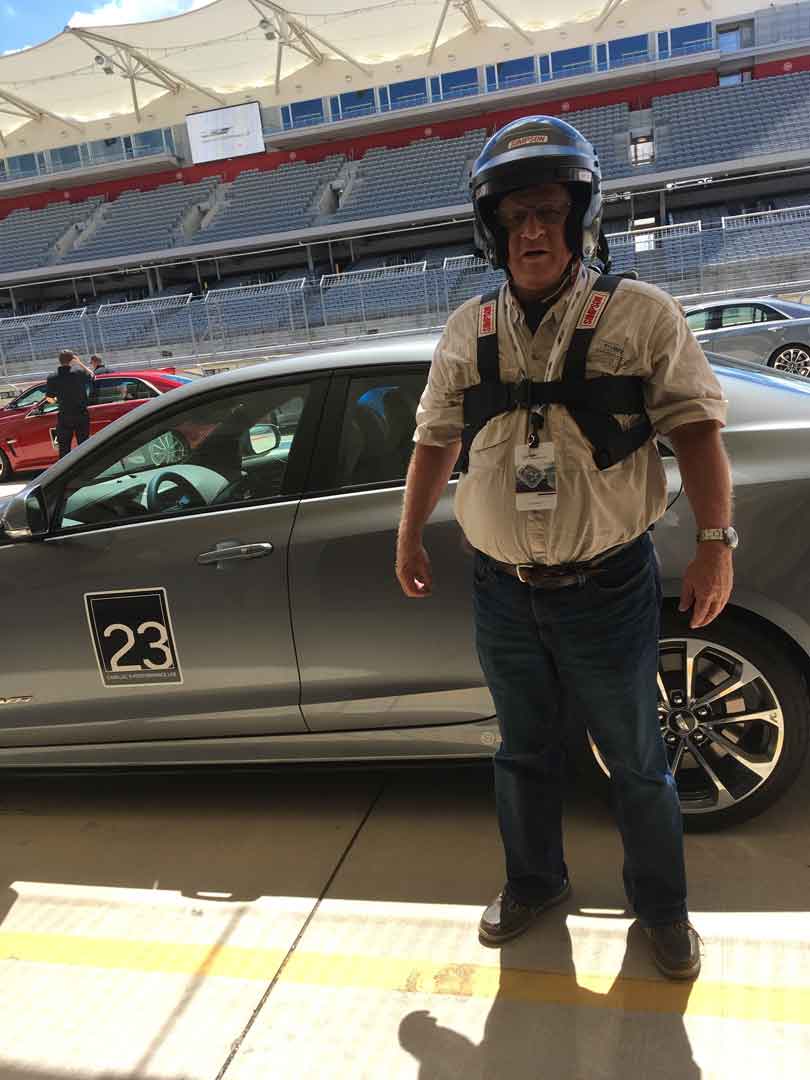