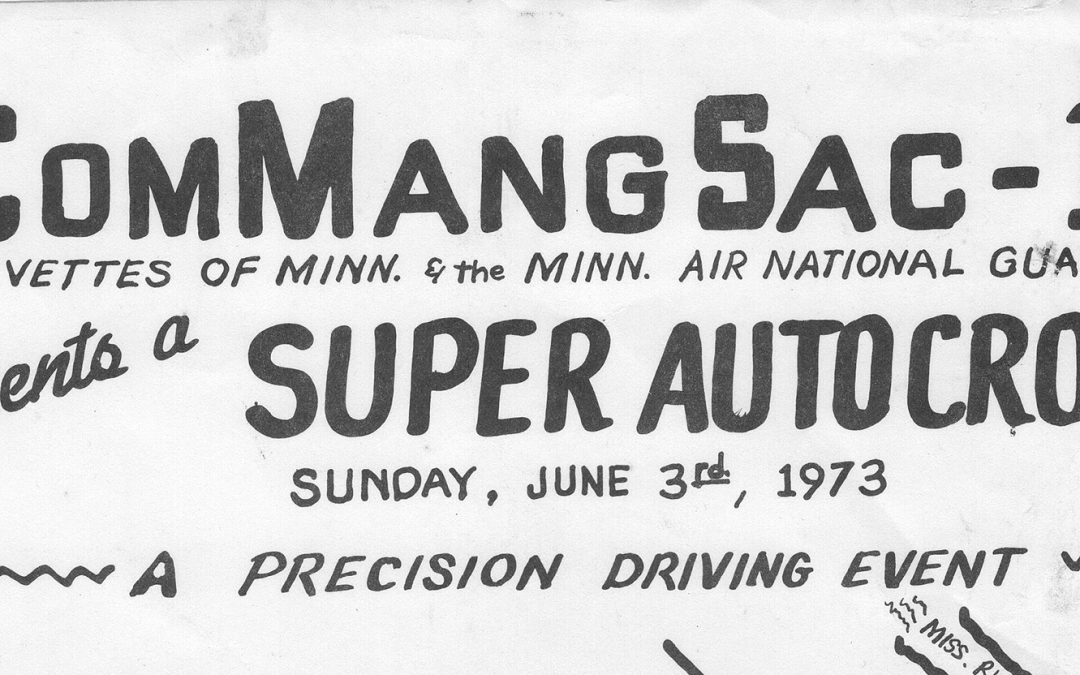 ComMangSac I was held on June 3rd, 1973. The letters stood for “Corvettes Of Minnesota, Minnesota Air National Guard, Super Auto Cross”, and was always held on the Minnesota Air National Guard Apron on the north-east corner of the Twin Cities International Airport. COM’s Denny Eggert provided the inspiration for the first event, and Dick Schafer spent time with the General at MANG getting the details worked out for us to have access to the facility. Dick Schafer and Roger Haro chaired the initial event, Roger and I chaired ComMangSac II, and Rich Gardner and I chaired ComMangSac III. Lots of people wanted to think the acronym COMMANGSAC had the “SAC” part for Strategic Air Command, but the nearest SAC facility was the Duluth Air Force base, and SAC was clearly for Super Auto Cross, which it surely was.

COM member Phil Shores, a teacher in the St. Croix Falls-Dresser School District, did the awards for the first two ComMangSac’s. They were very nice 8 by 10 black and white photos action photos of the winning cars, mounted on foam boards, and lettered by Roger. Most years the event was held the last Sunday in July, but dates moved a bit to accommodate other activities and racing events. When Rich and I put on ComMangSac III, it was by far the largest autocross ever seen in Minnesota, with something like 143 entries and about 25 Corvettes (back when a typical event might draw 30 or 40 entries). For many years, the Minnesota Air National Guard grilled burgers and brats outside the NCO (or was it the Officers Club?), and welcomed us inside after the event. I remember very inexpensive pitchers of beer and soda, plus pizzas, being made available to us.  Also MANG members were always allowed to enter the event free. Other years we had the Zimdars with their “Wienie Wagon” doing the grilling, or Kenny Williams “Mini Donut” wagon at the event. Later, Meetings and Activities Director Juan Nazario arranged to have Hooters from Mall of America supply sandwiches, with some of their staff serving the food, and posing for pictures with our cars.

Each year we provided a gift check to the MANG’s Chapel Fund that went toward chapel expenses at their Fort Snelling facility. Our treasurer George Haun served as the contact person going between COM and “The Colonel” for many years. Our last year there was 2001, as security restrictions following the Sept. 11, 2001 Trade Center and Pentagon attacks prevented us from having access to the facility. For over 25 consecutive years, we enjoyed a great relationship with the Minnesota Air National Guard. A feature of for each of the events was a dash plaque given to all participants with a map of the course, done through Mike’s Pro Shop, and Mike Schmidt (where we also purchased most of our awards for many years; Mike in addition to owning the Pro Shop at Minnehaha Lanes and being a Pro bowler, also was a Corvette Racer, running a C-3 B Production Corvette for many seasons). The original course design was a very miniaturized version of Road America, with the entrance corresponding to Turn 1, and the exit roughly Turn 3, at the start of the long downhill straight (no downhill on the apron, though). The course even had a “kink”.  Over the years the design evolved, but a look at the various dash plaques would show it retained a basic shape of Road America.

We always did the course set-up on the previous Saturday, and because of facility rules had to use tape for the location of all the pylons. Paint and even chalk were clearly not permitted on the concrete. Also there were several warning signs painted on the edge of the apron toward the runways which included the message “NO TRESSPASSING;  USE OF DEADLY FORCE IS AUTHORIZED”. That gets your attention!

The event also had a “travelling trophy” that some years went to the overall FTD winner, sometimes to the fastest Corvette, and later to the fastest Corvette driven by a COM member (which made it easier to get back for the following year!). Some of the legendary cars at the early events included Steve Kline’s former Jerry Hanson SCCA racing Echidna, and Hansen’s former Formula 5000/Formula A/Formula Atlantic racer driven by then-owner Frank Mahaney (also a Corvette driver). And of course COM’s Darwin Bosell driving the Kramer Tire ice racer/SCCA racer, and former John Biza Corvette was always a top contender for fastest Corvette. There is reference on the flyer to this being the first event in the COM Autocross Series. At the time, COM held a Series similar to the current MOWOG Series, with events at Elko Speedway, Raceway Park, the State Fairgrounds Speedway, the MANG facility, and another venue.

I attended the 1973 event as a spectator shortly after Jerry Doetkott introduced me to the club, and joining COM in June of that year. The following weekend, I drove in a PCA autocross at Normandale Community College, and was immediately hooked on the sport. Now, over nearly 1800 autocross events later, and in my 50th season of driving in autocross events, I still look back on that first COMMANGSAC fondly. Lots of great memories of all the drivers, fantastic cars, club members, and experiences associated with the ComMangSac events over the years.

Remembering the 1999 COMMANGSAC Event
I was the event master that year and the day was perfect for a race. The government concrete offered a level of grip that was impressive. The day heated up and was extremely hot, I think in the 100+ degree range. My wife Karin had just purchased a new F-150, 4×4, red with the tow package the day before. We had filled up a large orange 3’ high water container we put on the tailgate of the truck for everyone, to make sure we had the crowd hydrated. It was so hot that Adrian Mullen and then later Bill Hoxmeier (current president) were overheating in the sun and both spent time in Karin’s A/C oasis. She spent the entire day, breaking in her F-150 by idling in the heat with the AC set to 11 (AC Spinal Tap setting)! We all survived the heat (barely) and had a fabulous event; thanks to our hosts; the Minnesota Air National Guard, who graciously opened up their facility to us.

Remembering the 1999 COMMANGSAC event
I remember that event. I was so frying, I sat in Karin’s F150, with the A/C on high.
People said on the last corner of the course, I was lifting my right front tire 3 inches off the pavement!! That was with my 1993 Z51 coupe, with “r” compound tires.
The grip was that good!
Bill Hoxmeier
President

I think Juan Nazario gave this to me and I believe it became the T-shirt art in 1995. Max, I remember well that very hot day at the ANG base (in 1999).  After the event you ran around dumping cold water on some of the racers!  I, for one, loved it! Many of us miss ComMangSac and wish we could resurrect it.  I think Jan Hanna has the record for most cones hit on a run still.

What a super fun event and thanks to all of you for your bringing back it’s history.

Below is a gallery of images from our past COMMANGSAC event. 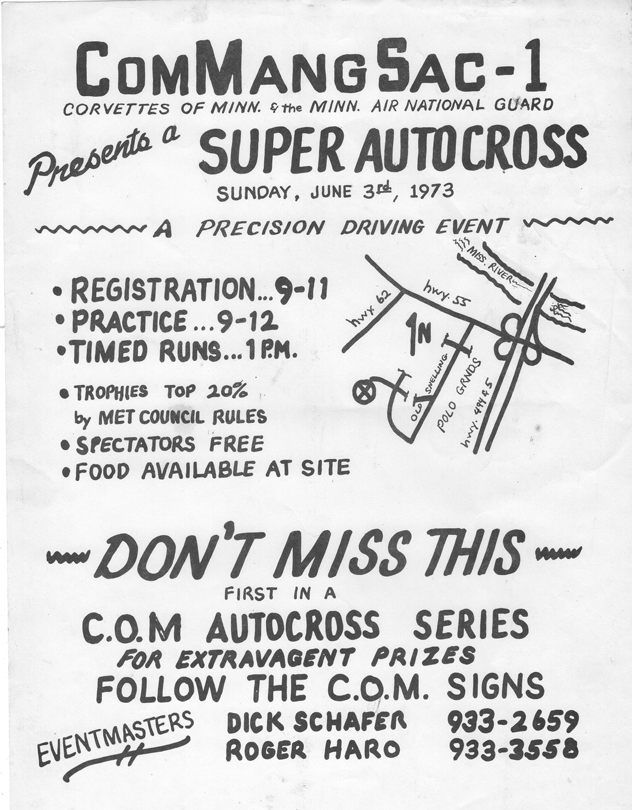 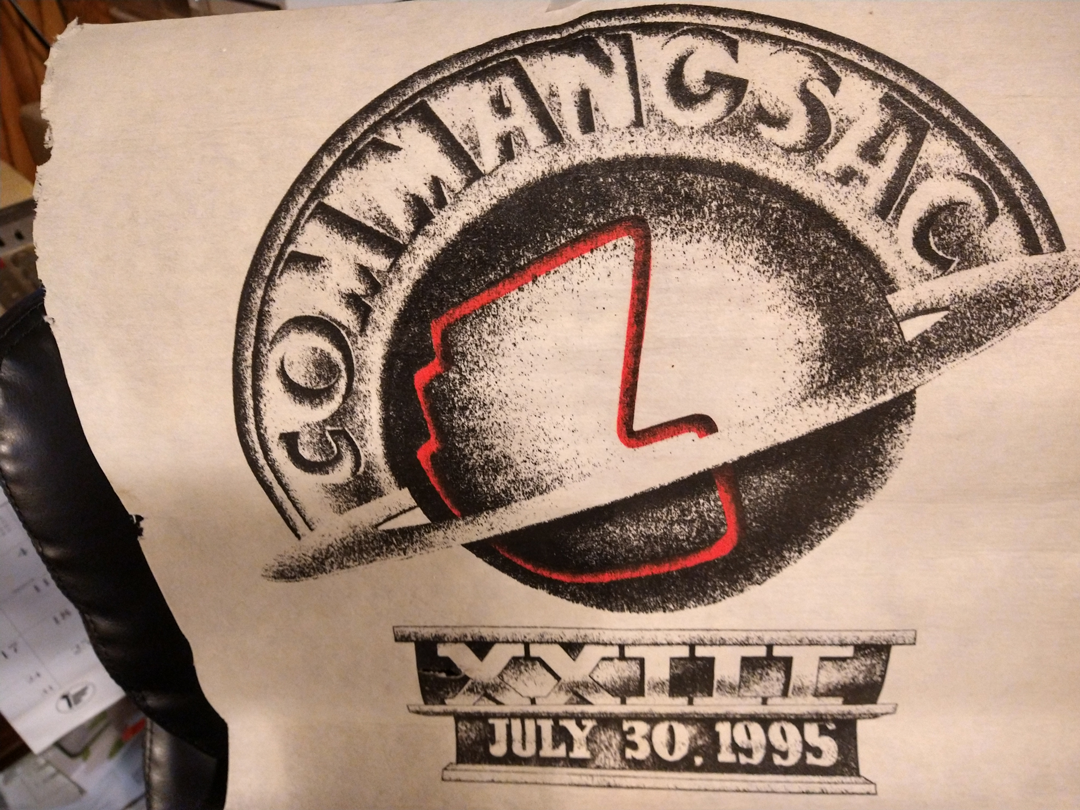